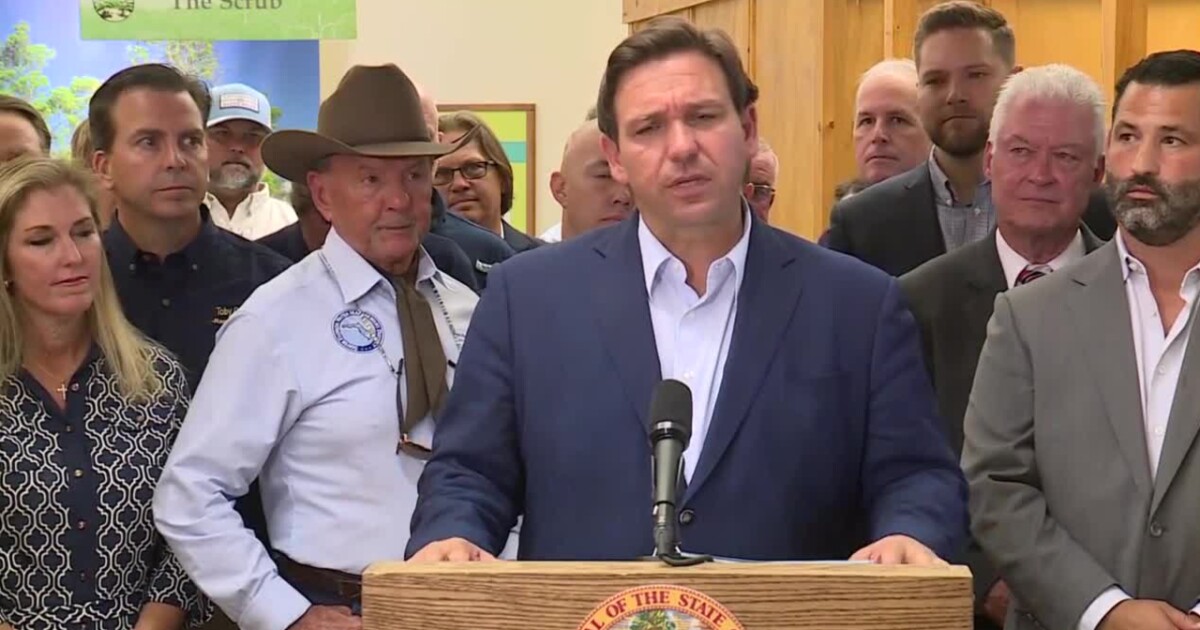 HOBE SOUND, Fla. — With the official start of hurricane season less than one month away, Florida Gov. Ron DeSantis says he’s concerned with the high water level at Lake Okeechobee and fears the likelihood of harmful water releases over the summer.

The lake level currently stands at 13.74 feet, according to the U.S. Army Corps of Engineers. The agency said it would like to see that level drop closer to 12.5 feet by the end of May.

Speaking at Jonathan Dickinson State Park in Hobe Sound on Monday, DeSantis said the lake level is more than two feet higher than it was at the same time the last two years.

“With the lake at the level it is now, we’re really concerned and bracing for the Corps to discharge. And that’s not, we think, the way we want to go forward,” DeSantis said.

The governor took a helicopter tour on Monday from Fort Myers to Stuart, going over Lake Okeechobee, the Caloosahatchee River, and St. Lucie River.

Potentially toxic algae has surfaced over the last few weeks along the lake in Pahokee, something DeSantis himself witnessed on Monday.

“There were definitely some patches. I thought I was gonna see more in some other areas. Maybe that’s a good sign,” DeSantis said. “At the end of the day, it’s only gonna get hotter, and we know that’s more prime for algae.”

As a result, the governor said he’s asking the Army Corps of Engineers to go back to some of their operating strategies from 2019 and 2020 when there were minimal harmful water discharges from Lake Okeechobee over the summer.

“Unfortunately, that’s been a little bit different now this year,” DeSantis said. “Because of these high levels, we are assuming that the Corps is gonna be discharging some of this water with a lot of algae content.”

U.S. Rep. Brian Mast, R-Florida, said the Army Corps of Engineers came to state officials last year and said it would be managing the lake differently in 2021.

“[The Army Corps] went into this with the wrong game plan,” Mast said. “This approach to summer, not even into the hottest time of the year yet, shows that it was a totally incorrect way to go out there and manage the lake.”

Eve Samples with Friends of the Everglades is worried about the health effects of the potential discharges.

“Not only are there short term impacts from exposure including respiratory ailments and liver disease, we’re concerned about the neuro-degenerative diseases like ALS and Parkinsons,” said Samples. “We think a little bit of hardship on the farmers south of the lake is worth the trade off if we’re allowed to prevent an environmental catastrophe from occurring.”

The governor said many water infrastructure projects are in the works, including the final phase of the C43 reservoir, C44 reservoir and stormwater treatment area, and the EAA reservoir in the Everglades, all of which will allow the Army Corps to divert more water south instead of east and west into the St. Lucie and Caloosahatchee rivers.

Earlier on Monday, the governor spent a few hours in Okeechobee, meeting with ranchers at the Williamson Cattle Company and also touring the dairy farm at Sutton Milk.

A great way to introduce yourself to the fun of a stand up paddle board is to do a rental while on vacation or even in your home town. Typically, paddle board rentals will cost…